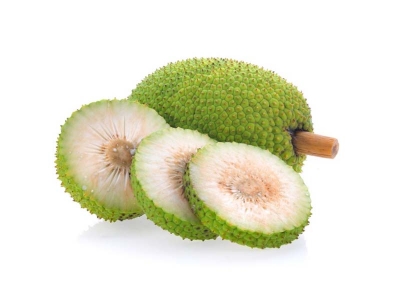 Breadfruit (Artocarpus altilis) is a species of flowering tree in the mulberry and jackfruit family (Moraceae) believed to be a domesticated descendant of Artocarpus camansi originating in New Guinea, the Maluku Islands, and the Philippines. It was initially spread to Oceania via the Austronesian expansion. It was further spread to other tropical regions of the world during the Colonial Era. British and French navigators introduced a few Polynesian seedless varieties to Caribbean islands during the late 18th century. Today it is grown in some 90 countries throughout South and Southeast Asia, the Pacific Ocean, the Caribbean, Central America and Africa. Its name is derived from the texture of the moderately ripe fruit when cooked, similar to freshly baked bread and having a potato-like flavor.